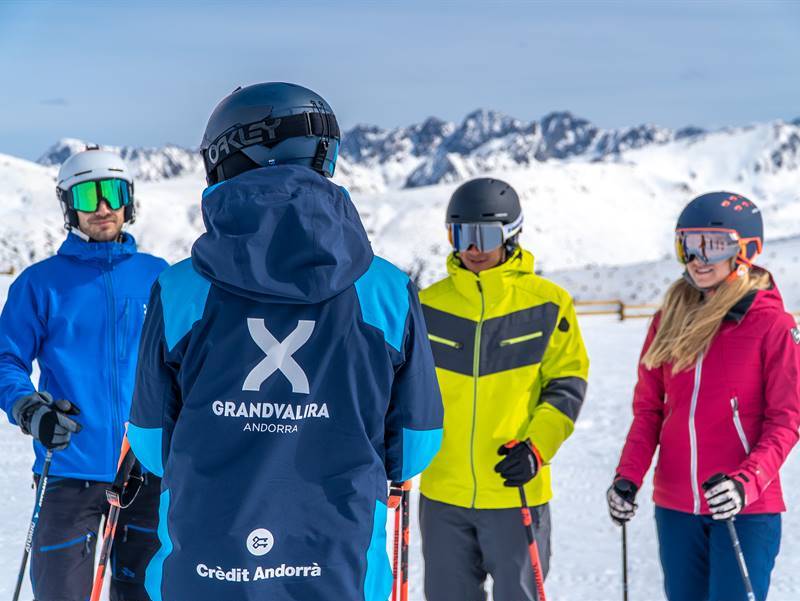 The Soldeu School has experienced a continuous flow of changes and evolutions, product of the union of veteran and younger generations, thus, combining experience with enthusiasm, the true pillars of the present association. Today, the School has more than two hundred and fifty professionals spread all over the world.

The Soldeu El Tarter Ski School was found thanks to the creation of the Soldeu ski resort, which opened its doors during the 1964/65 season. Back then, there were only four Andorran ski instructors, under the direction of the them instructor, Miquel Casal.

Years went by, times changed and in the 1990s we saw a new discipline appear: snowboarding, which of course the School started to teach and this led to the creation of the School's own snowboard school. This new sport was also accompanied by the incorporation of telemark skiing as a speciality.

In 1996, Soldeu saw the opening of the first 8-seat cable cab in the Pyrenees, and in 2000, the new Canillo sector started operating, opening the third branch of the Soldeu-El Tarter Ski School.

At present, times have changed, but the spirit of quality and service continues to be same as the very first day. Mr Toni Rodríguez supervises and directs this traditional School and manages to make it a benchmark for high-quality teaching and customer care. The quality certifications granted to the institution, ISO 9001, ISO 14001 and OHSAS 18001 are proof of this career. Also, our School has been acknowledged as the best Ski School in Europe, according to the prestigious competitions World Snow Awards 2012, held in the United Kingdom, and including the participation of benchmark Alpine Schools such as Courchevel or Val d'Isere.